Cellphone Towers Will Get A Makeover–And Fake Trees Will End

Cellphone Towers Will Get A Makeover–And Fake Trees Will End 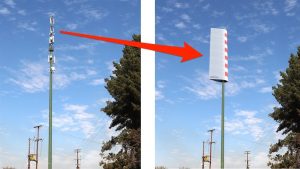 South African company TowerWing has very specific engineering ambitions: it wants to make cellphone towers better able to deal with wind, which it says will improve their lifespans, and allow them to carry more gear.

But if it succeeds it would also, along the way, have a significant impact on the way cities in South Africa and beyond look, giving prominent high-rise masts a visual makeover.

It would also kill off fake-tree cellphone masts for good – though those could be replaced with advertising.

The various bits and pieces attached to cellphone masts increase their wind drag, which both limits how much communication equipment can be attached, and reduces the useable lifespan of towers. With its “Streamliner” shroud, says TowerWing, it can reduce the wind load on a fully-loaded tower to less than just the naked pole would experience, permanently, without a reduction in the radio performance.

“By rotating with the wind, the streamlined design of TowerWing directs wind smoothly around the tower, reducing the pressure exerted by the wind and hence movement of the tower. This, as well as the reduction in turbulence caused by enclosing the antennas, greatly decreases the stress on the structure and its foundations.”

That is particularly useful in heavy weather, as climate change threatens to bring an increase in rough weather, even as cellphone companies roll out many more masts to satisfy the appetite for 5G services, which require much more closely-spaced masts than previous generations.

The company is in proof-of-concept phase with a cellphone provider it describes only as “one of the leading mobile network operators in Africa”. TowerWing says its shroud can be put up with no, or minimal, downtime for towers, which could see existing masts quickly transformed.

The fake trees that were once in vogue may take a little longer, but could be worth it – financially – for their owners, and their end could be good news for neighbours too.

“The fake-tree towers are notorious for noise during windy periods and the [radio frequency] performance is restricted due to metal parts in branches,” TowerWing told Business Insider South Africa.

But the neighbours may have to put up with new advertising billboards in the sky.

Its skins can be customised, says TowerWing. That means the companies that own towers could set up a secondary revenue stream, selling advertising.

See how TowerWing is pitching its tower makeover to cellphone companies:

At TowerWing™ we think differently, we Think Streamlined.